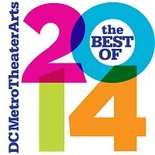 Alabaster Reviews:
"Director Kirstin Clippard keeps the pace brisk, and is adroit at balancing the discussions of tragedies in the past as well as the occasionally raunchy observations from the goats. I don’t think I’ve ever seen another play that’s quite like “Alabaster...”
- Jeff Hudson
Cap Radio
"Director Kristin Clippard carefully keeps the pace steady and the characters connected with each other and the audience."
- Patti Roberts
Sacramento News and Review

The Roommate Reviews:
"Under Kristin Clippard’s nuanced direction, the American Stage production traces the bumpy, pitted arc of the women’s relationship; it’s not always pretty, but it’s always fascinating, and above all else it’s fiery and ultimately very, very funny."
- Bill DeYoung
The St. Pete Catalyst
"Their comedic timing drew tons of laughs. They use every inch of the stage and perform real tasks like slicing apples and making coffee."
"Sharon’s descent into illicit activities are at first influenced by Robyn, but then she abruptly dives off the deep end into waters that Robyn won’t venture. Her transformation is so dramatic that it seems unbelievable, but she does it so gleefully that the audience was guffawing at her antics. And as it’s happening, a more subtle, poignant change happens in Robyn. That change is the meaningful difference that sets this show apart from the odd couples that came before." - Maggie Duffy
Tampa Bay Times

A Christmas Carol Reviews:
"Set in the quaint and masterfully designed attic of a Victorian Era family's home, director Kristin Clippard's unique storytelling experience of "A Christmas Carol" places the audience alongside the family as they tell the story of the miserly Ebenezer Scrooge... to their youngest child. The narration effect we have with the family is done with such subtlety that you easily find yourself slipping into the story..." - McKenzie Lakey
Broadway World
"More important than the flash however was the emotional heart of the production. This is a great show to warm even the coldest heart this holiday season." - Thomas Thorspecken
Analog Artist

Twelfth Night Reviews:
"Clippard has gone full throttle on the farcical aspects of "Twelfth Night, using the talents of Monmouth veterans and skilled newcomers to bring theatergoers to tears of laughter. The physical comedy of the show, the clever use of potted props and the breakneck pace of the action makes this one of the most memorable productions at the Shakespearean Theater of Maine."
"This is a fine and funny production that will satisfy Shakespeare scholars and theatergoers experiencing the Bard for the very first time." - Judy Harrison
Bangor Daily News

The Luckiest People Reviews:
"...playwright Meridith Friedman and director Kristin Clippard beautifully capture the melancholy in these characters’ souls."
" ...Clippard’s actors make the everyday consistently interesting and effortlessly lift the inconsequential to the compelling."
- Matthew J. Palm
Orlando Sentinel
"I laughed, I cried...."
"The injuries of childhood surface and the injustice of being treated like a child as an elder become a driving theme."
- Thomas Thorspecken
Analog Artist

Les Liaisons Dangereuse Reviews:
"This exquisite production was directed by Kristin Clippard..." - Wendi Winters
DC METRO
"...Clippard... does an admirable job taking us back to the 1700s. The pace moves right along, from the characters’ dialogue to the tightly choreographed scene changes...
...beautiful visually, with Clippard and the cast doing a fine job keeping things moving." - Jim Reiter
Bay Weekly
Voted one of the Best University Productions of 2014
DC METRO

​Imaginary Invalid Reviews:
"It’s so much fun for the middle of the workweek, it almost feels illegal." - Andrew White
MD Theatre Guide
"...three riveting acts of fast-paced fun, with a stellar cast reveling in every rhyming couplet...
...director Clippard’s focus on the details pays off." - Jim Reiter
Bay Weekly
"Witty and sharp, with clearly defined characters and opulent costumes, Director Kristin Clippard does justice to this classic satire of lust, greed, and the medical profession." - Michael Poandl
DC METRO
Voted one of the Best Plays of 2014
DC METRO

Reviews of A Midsummer Night's Dream:
"...this mischievously entertaining show is a brilliant representation of how the company continues to grow…" - Amanda Gunther
DC Metro Review
"Yet it’s easy to follow, swinging with ease from extremes of tenderness to slapstick." - Jane Elkins
Bay Weekly Review

"Another hallmark of the company is the combination of eloquence and energy among its young actors." - Mary Johnson
Baltimore Sun Review
"I adored every minute of it!" - April Forrer
MD Theatre Guide Review

Photo by Thomas Eslinger
Mastering the demanding art of directing
She Stoops to Conquer director Clippard enjoys collaborating to bring stage productions to life
article by Christopher Claire for Iowa Now, May 4, 2013